Planning Board Meeting Notice and Agenda for Wednesday, October 5th 2016 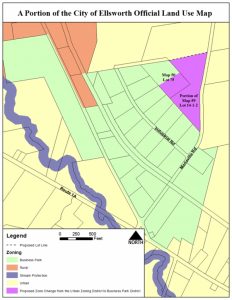 PUBLIC NOTICE and AGENDA for October 5, 2016

The regular meeting of the Ellsworth Planning Board will be held Wednesday, October 5, 2016, at 7:00 PM in the Council Chamber at City Hall to hear public comment and for consideration of the following requests:

2. Sketch Plan for a Major Subdivision titled Cedar View Estates for Cedar View Properties, LLC. The proposal is to create 12 lots located on a 67.2-acre property on Main Street, near the Hancock town line, (Tax Map/Lot: 28/12-5) in the Rural and Shoreland zones.

a. PUBLIC HEARING AND GENERAL DISCUSSION.

3. Preliminary Plan for a Major Subdivision titled Upper Lakewood for Craig T. Fellis. The proposal is to create 7 lots located on a 22.3-acre property on the Mariaville Road (Tax Map/Lot: 117/20) in the Rural and Shoreland zones.

a. PUBLIC HEARING AND DETERMINATION OF COMPLETENESS.

a. PUBLIC HEARING, DELIBERATIONS, FINDINGS OF FACT, AND CONCLUSIONS.

a. PUBLIC HEARING, DELIBERATIONS, FINDINGS OF FACT, AND CONCLUSIONS.

6. Request of the City Planner for Recommendation to the City Council of a proposed amendment to the City of Ellsworth Official Land Use Map. The proposal, brought forth by DMJ, is to consider the rezoning of land from the Urban Zoning District to Business Park Zoning District for the purpose of developing a Commercial Composting facility. The rezoning includes 2-acres of Tax Map/Lot: 50/75, accessed off the Industrial Road, and approximately 8.1-acres of Tax Map/Lot: 59/14-1-2, off the Mariaville Road (Route 180) (as depicted in the map on the reverse side of this notice).

a. DISCUSSION OF PROPOSED AMENDMENT.
b. PUBLIC HEARING.
c. RECOMMENDATION TO CITY COUNCIL.